The History of The Magazine 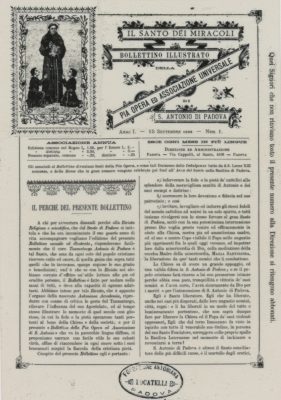 Then in 1888 he started first, the publication of the magazine “The Saint of Miracles” and then the Libreria Antoniana.

“The Saint of Miracles” is a record that very few magazines can claim. Maybe no even its founder, whose intellectual and organization powers did so much for the diffusion of publications about St. Anthony, could have foreseen such extraordinary results.

The years in which “The Saint of Miracles” started (to the side the cover of the first edition that carried the date of 15 September 1888), were years of great editorial activities, also within the area of the Catholic culture. Many of these initiatives were destined to last for only a few months. Instead “The saint of Miracles”, right from the very beginning, found its specific collocation, without any other ambition other than being an instrument of communication and spiritual union among the devotees of St. Anthony.

There are two aspects that have always characterized the magazine, right from the very beginning: the large amount of space dedicated to dialogue with its readers, testifying to the specific character of this editorial initiative, that has been built up on the approval of its readers, as well as its international opening in various languages, right from the very early editions, these all go to show just how universal devotion to St. Anthony is.

Now we can look back in admiration at our founder’s great initiative, and the ability of all of those who over this long period have contributed to the circulation of this magazine.

According to Leo XIII’s definition St. Anthony is “the Saint of the whole world”, but right from the very beginning, that is 13 June 1231, the day of his death, the Paduans have elected him their patron, claiming him be purely Paduan, expressing the gratitude and affection of the whole city to that Anthony who has, together with “The Saint of Miracles” made himself known through out the world as a centre of culture and faith.

“The Saint of Miracles” carries out a providential duty of not only being a connection among the devotees of St. Anthony, but, also with those who wish to be kept up-to-date with the problems in Christian life. A whole “universe” of faith, affection, confidences and requests revolve around our magazine, for which the editorial office offers answers that are characterized by their clarity and charity. The readers are the true beneficiaries of the magazine. Many of them live in other countries and with their devotion to St. Anthony, they cultivate their religious faith, their love for their homeland and their attachment to the Church.

The problems of the mass media has nowadays become urgent more than evident. Those Catholics who wish to be obedient to the Ecumenical Vatican Council II and to the Inter mirifica and the Communion progressio will leave a very strong mark on the network only if they put their efforts together. I still believe those indications that Don Locatelli gave us in the 1895 edition of the Sermones by St. Anthony are still topical. We will summarize them, interpreting them in a modern key: to form oneself with a strong robust culture, to have deep knowledge of the Word of God, actively participate in the problems of the Church. All of these initiatives are to be found in “The Saint of Miracles”, which in its pages is aware of the concerns of the world today that also coincide with that great duty of “testifying”.

It is not easy to understand the tendencies of our society, but as we have been called to live, here and now, our experience as baptised people, we must always trust in the intervention of the Lord, and always be “present” in a serene and sure way.

At over one hundred and twenty five years since it was started “The Saint of Miracles” continues to fulfil its role of lovingly watching over, reminding us of the things that are important. This magazine constant motive is love for the Saint. This is part of its history; it is also the secret of its vitality. St. Anthony is a strong point of reference in the religious life of our land. We invoke him as our patron, we listen to him as the evangelic doctor and we imitate him in the transparency of Jesus, king of the humble. 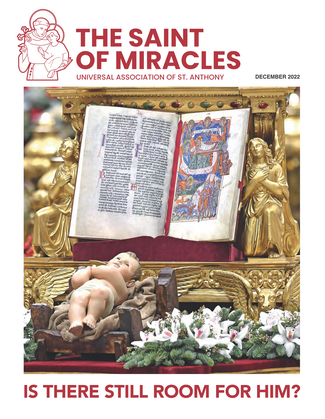