Anthony was born in Lisbon (Portugal) in 1195. He was brought up in a Christian family who had moved there when the town, taken from the Moslems, gained its Christian face again (1195-1202). 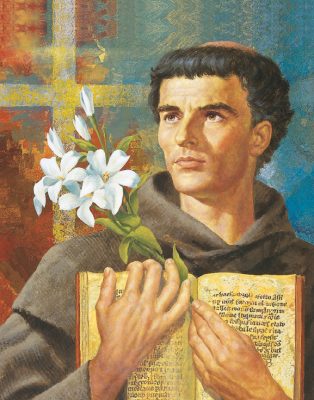 At the age of seven he started to attend the cathedral school and, as we would say nowadays, he received a rather good primary education (1202-1210). His religious vocation developed in this environment. The crisis of puberty did not affect his innocence but anticipated his choice and he joined first the Order of the Canons Regular of St. Augustine, entered the monastery of St. Vincent in Lisbon (1210-1212) then that of Santa Crux in Coimbra (1212-1220). There he received a full religious and theological education, the former favoured by his deep devotion and strong discipline, the latter by his lively intelligence, extraordinary memory and constant studying.

In 1220 he was a priest in Coimbra. When the tranquil life of a teacher of theology in the schools of the monastery and the care of the souls in the parishes depending on it seemed to open out for him, a new spiritual crisis induced him to join the Franciscan Order. This was caused by thirst for martyrdom when the relics of five Franciscan missionaries, who had suffered martyrdom in Morocco, were buried in the church of his monastery. He wore the Franciscan habit, changed his name Ferdinand into that of Anthony, retreated to the hermitage of Olivares, near Lisbon (summer-autumn 1220), made his religious profession and left for Morocco. But a strange disease soon shattered his dream (December 1220-March 1221). On his return journey the ship, pushed by contrary winds, dropped anchor in a port in Sicily and not in Spain.

At the Franciscan monastery in Messina he was told that the General Chapter of the Franciscans would take place in Assisi during Pentecost of that year (1221). Anthony took part in it; most probably he was the only Portuguese Franciscan present there. He saw St. Francis but he did not make himself known to him. By then he had realized that the path to sanctity consisted in putting himself entirely in the hands of God and he chose to follow it. Brother Graziano, the provincial minister for Romagna took the inexpert young brother with him so that he could celebrate Holy Mass to the brothers of the hermitage in Montepaolo. Here Anthony wanted to fully live the rule of the Franciscan hermit (June 1221- 24 September 1222). They were fifteen months in total hiding, rigorous penance and contemplation.

He left the hermitage in Montepaolo on 24 September 1222 when, on the occasion of a priestly ordination that was celebrated in Forlì, he, in obedience, had to make a speech. That was the beginning of his life as a great preacher, teacher and min`ister of the Order. From Romagna he went to preach in many different places in northern Italy and southern France. Preaching was his first main duty (24 September 1222-autumn 1224), and so he became the first great popular preacher of the Franciscan Order. Later his main task was teaching theology to the friars minor in Bologna and Montpellier (autumn 1224- June 1226); the first teacher of the Franciscan theology that a short time later would have very great masters such as Alessandro d’Hales, St. Bonaventura and the Blessed Giovanni Duns Scoto.

A third task removed him from the teaching of theology and he was appointed guardian of the province of Limoges, then provincial minister of Romagna which, at that time, included all northern Italy. He was praiseworthy for the foundation of many monasteries as well as for his attempt to conciliate the fresh Franciscan ideal with the hard reality of a fully developing Order (June 1226-July 1230).

Worn out by hard work and hydropsy in July 1230 he obtained to be released from all positions and retire in Padua in the monastery of Santa Maria Mater Domini (8August 1230- 13 June 1231). And so Padua was lucky to enjoy the last flashes of that great fire, his “Sunday and holiday Sermons,” St. Anthony’s only certain work. His attempts to tame the ferocious beast, Ezzelino III da Romano, and the daily preaching of the Lent sermons in all the churches of the town revealed all of Anthony’s apostolic soul.

After his serene death his body, according to his expressed will, remained in Padua which, owing to the exceptional thaumaturgic events that followed the burial of his body in the church of Santa Maria Mater Domini, promoted the process for Anthony’s canonization and obtained only one year after his death (30 May 1232). Seven centuries later, on 16 January 1946, Pope Pious XII proclaimed him “Doctor of the church” with the title of “evangelicus”. 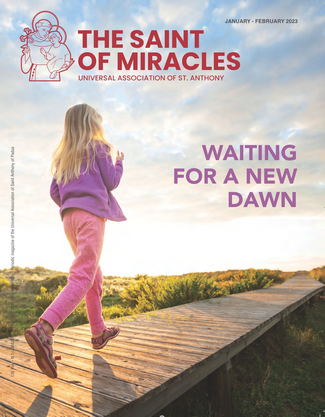